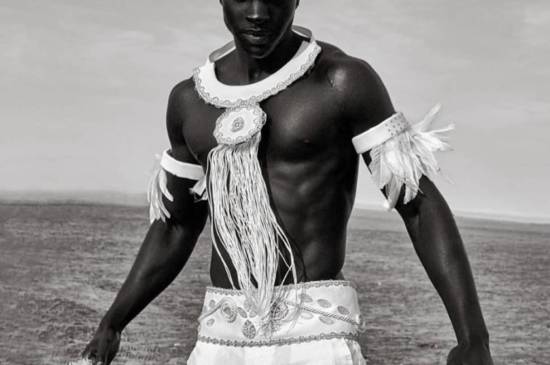 28-year-old Jimi Loboi tries to recollect the moment he waited with other nominees at the 2017 African Fashion Industry Awards, listening for the announcement of the winner of the Rising Star-Model of the Year, “I knew I’d been nominated but I didn’t think I’d win. When they read out my name my body began to shake and everything seemed to go black.

I was frozen while the people sitting next to me were saying ‘It’s you! Go up!’ Loboi rose on shaky legs and managed to deliver a short heartfelt thanks to the facilitators of African Fashion Week Toronto, for his win.

Loboi, with his chiseled abs and perfect ebony skin, looks like he was born for the runway, but as a child of Sudanese immigrants to Canada, his family had different expectations of him, “I came to Canada in 1996 with my mom and siblings to avoid the conflict happening in Sudan.

My father had  come to Canada before us and we settled in Halifax.  Eventually, I pursued a Bachelors of Arts degree but I dropped out to come to Toronto,” he explains. The reason Loboi came to Toronto was to pursue his dream of being a model; a dream that blossomed despite bullying he endured in school in Halifax, “I didn’t expect to come to a new country and be judged on my skin tone, but I was.

I was bullied, and at times told to go back to my own country. It pushed me to decided to be proud of myself, and to help others be proud of their skin tone.” Loboi began receiving requests to model in Halifax at small-scale events and fashion shows and joined a modeling agency. His parents were not thrilled with his chosen career path.

In 2010, he decided to leave for the better opportunities in Toronto, “I played it by ear. I didn’t realize it would be so difficult,” he admits. He was turned down by numerous agencies but did secure a manager. He worked gigs via word of mouth and decided to audition for the first ever African Fashion Week Toronto in 2013, ” I auditioned and then waited and waited for the callback.

I was so nervous in my first runway show I think I almost tripped onstage! I’ve been modeled in the show since then and I’ve gotten to see it become bigger and bigger every year.”  Loboi’s strategy for his career is to advertise himself, be confident, and inspire others to be comfortable in their own skin as well. He’s also found a way to overcome his nerves, “I do get the jitters once in a while so I dance it off backstage,” he laughs, “When I’m walking down the runway, I’m smiling automatically at the joy I’m feeling.”

He will be taking over the stage in the Toronto Men’s Fashion Week 2017. He says his parents are beginning to understand his passion, “My mom and dad weren’t fully supportive at first but they are coming around as they see me progress. My goal is to get signed to a top agency and start doing shows internationally.” Loboi also has advice for young models with the runway in their sights, “Be yourself. Don’t come to work with a superior attitude or negativity, Be humble. Carry yourself like a gentleman.”