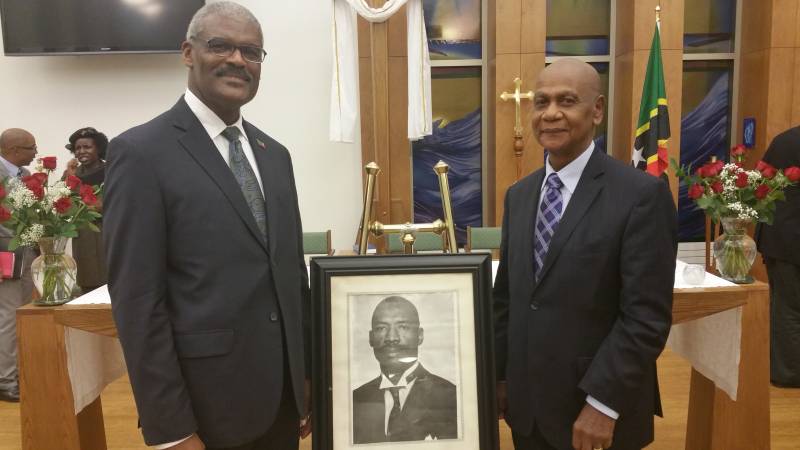 On November 12th, a cross-section of the St.Kitts and Nevis diaspora based in Toronto gathered to celebrate the 100th anniversary of the birth and legacy of national hero, Rt. Excellent Sir Robert Llewellyn Bradshaw. The observance consisted of a church service at the St.George Anglican Church followed by a reception, held under the theme: Strength of a Man, Triumph of a People, Forever Fearless.

Sir Robert Bradshaw was born in St.Kitts in 1916 and rose to prominence as a workers’ rights advocate in the lucrative sugar industry of the time. He became president of the St.Kitts and Nevis Trades and Labour Union in 1944.  In 1946 Bradshaw entered politics and won a seat in the Legislative Council and later became a member of the Executive Council. In 1956 he served as Minister of Trade and Production for St.Kitts/Nevis and Anguilla.  Bradshaw was a passionate believer in Caribbean unity and was elected to the Federal House of Representatives during the West Indies Federation era (1958-1962). He held the post of Minister for Finance for that entity.

In 1966 he became Chief Minister and in 1967 the first Premier of St. Kitts-Nevis-Anguilla. Under his leadership, all sugar lands, as well as the central sugar factory, were bought by the government. Bradshaw was instrumental in the talks with the U.K government to pursue the transition of St.Kitts and Nevis from an associated state to full independence.  He died in 1978 before seeing this goal realised.

Honorary Consul of St.Kitts and Nevis to Ontario, Dr.Winston Isaac, relayed a message from Her Excellency Shirley Skerritt-Andrew, the High Commissioner for St.Kitts and Nevis based in Ottawa, to the celebrants. The High Commissioner noted in her message that Bradshaw had been posthumously awarded the title of First National Hero by the St.Kitts government in 1996, and deservedly so. Meanwhile, former Honorary Consul General of St.Kitts and Nevis, John Allen, reflected on Bradshaw’s contribution to his country and the region, highlighting Bradshaw’s unwavering commitment throughout his life to nationalism, regionalism and the Caribbean identity.

An exhortation was delivered by Pastor Gilbert Estridge who described Bradshaw as a man who put his country’s needs over his own; a man who was intelligent without pretension and who had the ability to relate to his people at every social level.

Former associates of Bradshaw point out that while he attracted controversy with some of his political decisions, he is remembered as a serious man with deep convictions, possessing empathy for the working class in particular.

The event also featured an audio recording of one of  Bradshaw’s speeches.

The 100th-anniversary celebration of the birth and legacy of the St.Kitts and Nevis national hero was hosted and produced by the Robert.L.Bradshaw Centennial Planning Committee, Toronto.