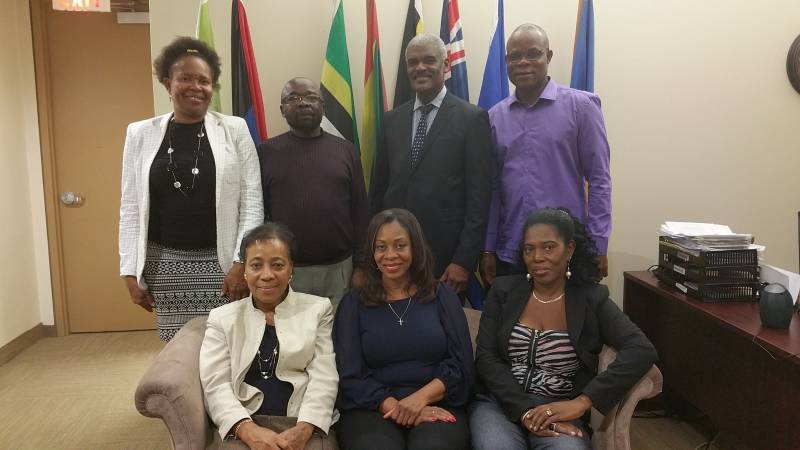 Members of the Council warmly commended Willius for his active participation in that body, helping to build and promote the O.E.C.S brand in Toronto.  Willius held the post of Vice Chairman of the O.E.C.S Nationals Council and was a member of the Council’s governance committee.

In an exclusive interview with TDN Radio, Willius spoke frankly about his achievements as well as the challenges he experienced during his stint as St.Lucia Consul General.

TDN Radio: When you arrived in Toronto four and a half years ago, what were you hoping to accomplish as Consul General?

Willius: It was the first time I had been deployed as a diplomat, so I needed to learn a bit a bit. Canada and St.Lucia already have well established friendly relations, so my goal was to strengthen and deepen that relationship. My second goal was to work with the St.Lucia association diaspora in Toronto, as well as with the wider diaspora community, which is why I actively got involved with the O.E.C.S Nationals Council, and the Caribbean Consular Corps (grouping of 13 Caribbean consul generals based in Toronto).

TDN Radio: How exactly did you work with the St.Lucian diaspora?

Willius: Part of my agenda was to deliver quality and accessible service to the community, so the first thing I did was to move the office of the Consulate to a more central area. so that it was more easily accessible for commuters by public transit.  I also tried to widen the range of services we offered, so securing passports, birth certificates, drivers license renewal, authentication documentation. I also wanted to improve the quality of the interaction of our staff with the community and I think I achieved that as well. We also worked on promoting our cultural heritage in Toronto.

TDN Radio: How did you do that?

Willius: As St.Lucians we need to be proud of our culture and share it-our national wear, our dances, our music, our Journe’ Kweyol Festival which is observed by all three St.Lucian associations which I helped to revitalise and is getting bigger every year. I also organized to send some people to St.Lucia for cultural dance training, and so we introduced the traditional masquerade and quadrille dances here in Toronto. I was able to get the community to work together on projects to assist St.Lucia in times of need, as well as other Caribbean countries. I also worked with some charities in the fields of education and health here to establish strong links with St.Lucian charities to help with projects there. So every year we send thousands of books to grade 5 students in St. Lucia, and from a health standpoint, we’ve been helping one of St.Lucia’s two hospitals to get training for hospital staff and supplying equipment. So all in all these were some of the highlights of my time in this post.

TDN Radio: What were some of the challenges?

Willius: The challenges started after I got to know my community. When we live in St.Lucia we have conflicts based on community differences or socio-economic brackets but you’d think when we travel we’d all come together as one, but for various reasons, we tend to isolate ourselves from the rest of the community. So the challenge was to get people to work together, but once they understood what my aim was, I was able to get people more active in the associations and activities.  But my challenges were more about getting support from back home when I started projects here. The Caribbean works different, so you want to get something done but they’re slow to respond, which can be frustrating.

TDN Radio: What’s next for you as you return to St.Lucia this month end?

Willius: I used to be in business, in manufacturing so I’m going back into manufacturing and trading back home. I’m looking forward to being self-employed.

TDN Radio: What advice would you give to the incoming Consul General to help him or her to build on the what you’ve done here?

Willius: I will leave a very good briefing/ exit report on all the projects I’m working on. I would say to the incoming Consul to get to know the community, do a lot of listening, try to learn very fast. Once you get to know the community then you can begin to initiate stuff, but in the beginning, don’t come in with the impression that you can direct people because you know what you want to do. Find the leaders in the community and build a team around you that can help you achieve objectives.  People need to feel that you care about them so that they can embrace you, and when you call upon them they will respond. That’s the only way you’ll be able to get things done.

TDN Radio: We wish you all the best in your future endeavours! Will it be a difficult transition for you?

Willius: I always planned to live in St.Lucia and contribute to national development there, so being here has given me the opportunity to serve my country away for a while, but it has always been my intention to return home. I’m prepared mentally and otherwise for it. Thank you.