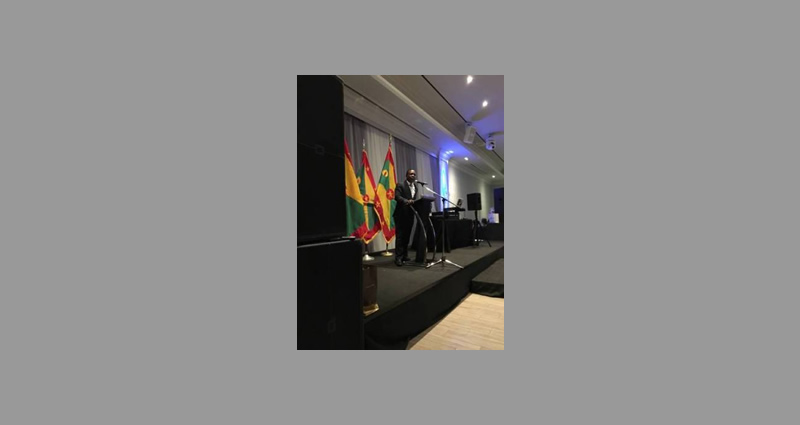 Grenada’s Prime Minister Dr.  Keith Mitchell says Grenada is being recognized internationally as one of the fastest growing economies in the Eastern Caribbean Currency Union. The Prime Minister boasted of Grenada’s tremendous strides in the development of all sectors on national life, as the island recently observed its 43rd anniversary of Independence.

Prime Minister Mitchell celebrated the observance with members of the Grenadian diaspora, members of the Caribbean Consular Corps, and friends of Grenada, at the Grenada Association Toronto’s Independence anniversary event. The Prime Minister addressed the audience of about 500 people, describing Grenada’s many accomplishments despite challenges, of revolution, natural disasters, recession and other threats.
He pointed to the hundreds of scholarships given out to Grenadian students and skills training provided for professionals, “major hotel,” and infrastructural projects, and a new port construction in Carriacou, as benchmarks of progress. He said investor confidence is at an all-time high, “Economically, we are poised for “take off.” We are putting our fiscal affairs in order and managing our economy…our people must be commended for their sense of purpose and unity in securing our achievements,” Prime Minister Mitchel added.

He praised Grenadians for putting politics aside in pursuit of the national agenda of development, referencing the Constitutional Referendum of 2016, as a result of the partnership between Government and social institutions. He reassured Grenadians that the collective wisdom of the island’s people, and the maturity of its democracy, have ensured that no force of divisiveness will impede Grenada’s remarkable growth trajectory.