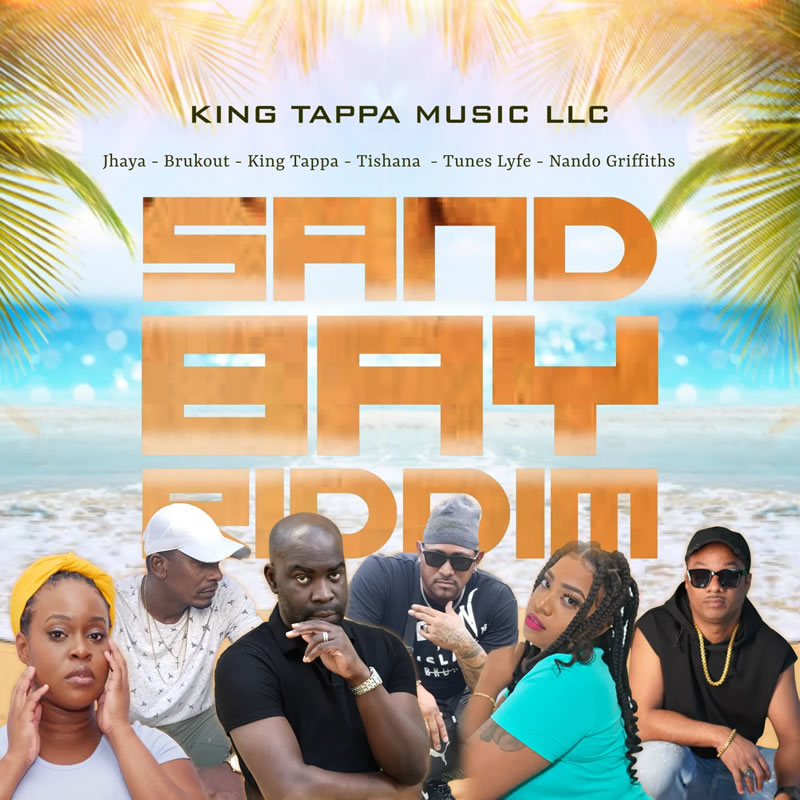 King Tapa Music LLC presents its very first musical compilation with an album titled “Sand Bay Riddim”. The project is spearheaded by reggae artiste King Tappa who is the producer of the album. Sand Bay Riddim was inspired by King Tappas love for his island of birth Dominica. Six independent artists were selected to be on the album three of which are independent artists from Dominica; Jhaya, Tunes Lyfe & Brukout.

Also on the Sand Bay Riddim is Nando Griffiths from the USA tri-state area, Tanisha from Jamaica and of course King Tappa himself. The Riddim has a tropical feel to it, you can hear the dancehall & afrobeats type feel when grooving to this riddim. Sand Bay Riddim is really one to look out for because each artist delivers a unique set of vibes on the riddim. Every song is performed in a very different style and has given the compilation a range of sounds that’s relatable to anyone. Sand Bay Riddim was released April 8th 2022on all digital platforms. Show some love to these incredible indie artists.
King Tappa says, “Sand Bay Riddim was inspired by my love for the island, my love for the beach(specifically sand bay in my hometown Marigot) and it was only fitting to feature Dominican artists on my first compilation. Dominica has some very talented artists who I believe can do so much if given the opportunity. It was only right that I showcase some of what the island has to offer.”
About King Tappa:
King Tappa is a reggae artist who has been performing for over 15 years. King Tappa is Dominican born but resides in the United States. He has released two albums and countless singles over the span of his career; and has performed at several venues across the world. His most notable performance was in Kenya Africa in 2016. King Tappa recently came off tour with a Jamaican based band called Link and Chain and is currently performing throughout the state of Florida. King Tappa is scheduled to perform at the Florida Jerk Festival on May 30th alongside artists like Baby Cham, Ding Dong and Destra to name a few. Please find the links to the Sand Bay Riddim below and a link to King Tappa’s website.
Sand Bay Riddim https://linktr.ee/kingtappa
Apple Music: https://music.apple.com/us/album/sand-bay-riddim/1607755395
Spotify: https://open.spotify.com/album/0gawc6cBTngjGFy0dKE3af