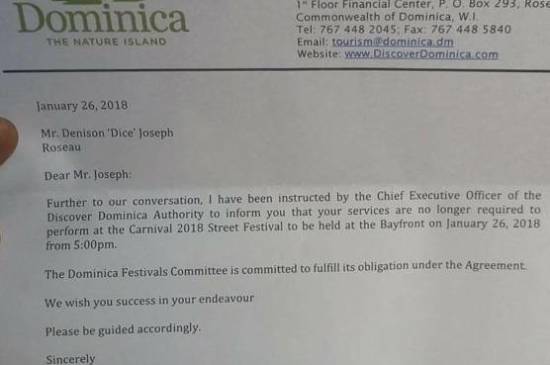 Eight-time Calypso Monarch Dennison “Dice” Joseph did not perform at The Carnival Street Festival Friday due to a last minute decision by the Dominica Festivals Committee (DFC).

Dice shared a copy of a letter he received from the DFC, on social media, just hours before the event was scheduled, which stated he was no longer required to perform. The letter was signed by Festivals and Events Manager Val Cuffy and copied to CEO/Director of Tourism Colin Piper.

The letter noted however that the DFC was committed to fulfilling all obligations under the agreement which appears to indicate that Dice will still be compensated.

Earlier this week Dice, speaking to Sam on FYI Daily on TDN Radio, said he had already been told he could not perform his popular 2018 hit “Looters” at the Carnival Street Festival. He expressed his perplexment at the request, theorizing that the “authorities” had not read, or fully comprehended the lyrics to this particular song. However, he said he expected that the song’s popularity would make it a fan favourite for the Carnival season.

Up to the day of the event, Dice had been debating whether or not to perform, but then received the DFC letter terminating the agreement. Dice’s fans have taken to social media to air their disappointment and anger over the decision.