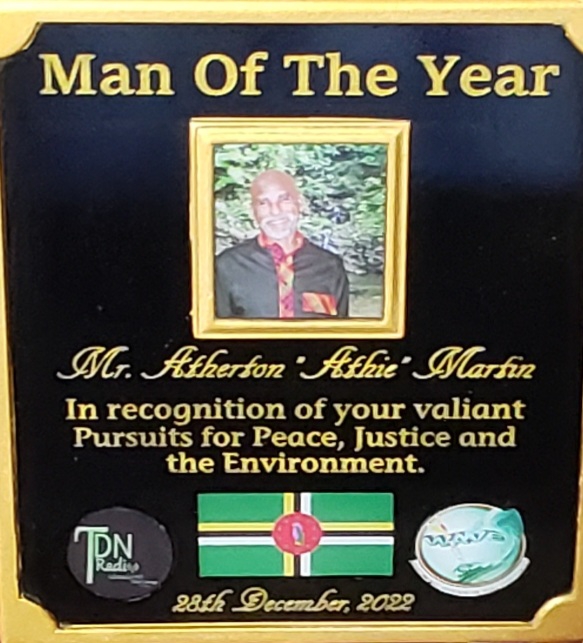 On December 28, the title of Man of the Year 2022 was bestowed on Mr. Atherton Martin. At a ceremony held at the Garraway Hotel hosted by TDN Media Network and WAVE (Waitukubuli Advocate for Viable Environments), Athie was honored by numerous persons who have known him over the last 50 years paying tribute to him and thanking him for years of service, advocacy and activism for the protection of the environment, the disenfranchised and the unrepresented.

TDN Media Network notes that the Man (or Woman) of the Year award seeks to recognize and thank individuals who have contributed to uplifting the lives of the people; someone who has sacrificed for the betterment of others without expecting rewards or accolades in return. It is however, up to us who recognize the work that they do, to create the space where we can demonstrate our gratefulness to them.

After over 50 years of community engagement and representation, 2022 saw Athie continue his activism leading awareness walks every Wednesdays in Roseau and at various communities around the Dominica aimed at focusing attention on issues that are affecting citizens. He also participates in, and many times lead, safaris to various locations where projects are being executed in a manner that is having detrimental impacts on rivers and other ecological systems.

Athie’s public engagement first came into sharp focus in 1972 when, as the manager of the CDC estate at Castle Bruce, he organized and led the workers to ‘takeover’ the Castle Bruce Estate instead of firing 30% of the workforce as the owners were asking him to do. Under Athie’s leadership the workers formed the Castle Bruce Farmers’ Cooperative, replacing the previous colonial owners, CDC, and significantly enhanced the economic and social fortunes of the people of Castle Bruce.

Other community work accomplished by Athie which were highlighted at the event included Athie’s strong and vocal opposition to the setting up by an international mining company to perform copper mining in Dominica. Athie almost singlehandedly sensitized the Dominican public to the environmentally destructive nature of copper mining and managed to stop the initiative at a very early stage.

Athie served as Minister of Agriculture as part of the caretaker government after the political events of 1978. His involvement with farmers spanned the full 50 years and include managing initiatives such as the Farm to Market program and work done with ship owners to get farmers’ produce to market in various islands in the region.

Many of the persons who walk with Athie on Wednesdays were present at the Garraway Hotel on the 28th to honor him and they presented him with a plaque to show their appreciation of his leadership and commitment to the Development of Dominica.

TDN Media Network presented Mr. Martin with the Man of the Year plaque and reiterated to him how much his work to preserve Dominica’s natural beauty was appreciated and transcends generation. The plaque reads that Mr. Martin was being recognized for his Valiant pursuits for Peace, Justice and the Environment.

Mr. Martin said that he was both humbled and honored to know that his work, which he performs as his duty being a citizen, was so widely appreciated and recognized. He thanked everyone who came together to host such a special event and honored his wife, Fae for her continued and unwavering support.

TDN Media Networks intends to make this award an annual affair honoring and thanking a new recipient each year for their work and commitment to Dominica.